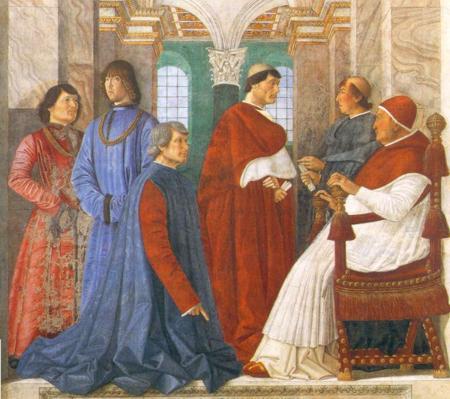 DID THE DUKE OF URBINO DO IT?? Now Marcello Simonetta, assistant professor of Romance languages and literatures, has cracked the case with the help of an ancient family heirloom. The evidence he unearthed points to the top of Florentine society and straight to the heart of the Vatican.

The key to the case was a code-breaking manual passed down through generations of the Simonetta family from their ancestor, Cicco Simonetta. Coded correspondence was common during the Italian Renaissance because writers had no assurance that confidential material would not be intercepted and read in transit.

“Using Cicco’s code-breaking manual,” says Simonetta, “I deciphered a letter and solved one of the most ancient and exciting mysteries of Italian history.”

The conspiracy involved two feuding families?the Pazzis and Medicis. The Medicis had been rulers of Florence for about 45 years at the time the letter was written.

Federico da Montefeltro, the popular Duke of Urbino, was the author of the secret letter. Its contents reveal that he conspired to overthrow the Medicis’ reign and that his co-conspirators included Pope Sixtus IV, the Pope’s nephew Gerolamo Riario, Archbishop Salviati, and other members of the Pazzi family.

Historians have known that the Pazzi family was implicated in the plot, but details were vague and the Duke of Urbino had escaped detection with his reputation as a noted humanist left intact.

“The Pazzis wanted their turn at ruling Florence,” says Simonetta. “They wanted the Medicis out of power and were prepared to use any method to oust them.”

The plot hinged on an attempt to assassinate two brothers in the Medici family: Lorenzo and Giuliano de’ Medici. Afterward, the duke planned to seize the city with 600 well-trained soldiers. In the newly surfaced letter, the duke insists on proceeding quickly with the assassination. He also expresses his thanks to the Pope for a gold chain that the Pope gave to his son.

“This proves the Pope bribed the duke into helping him turn on the Medicis,” explains Simonetta. “In fact, one painting of the duke’s son Guidubaldo shows him wearing this golden chain, as if the Pope were saying, ?The deal is now done.'”

The letter suggests a new interpretation of another painting of the time, a portrait of Duke Federico, painted by Piero della Francesca, preserved at the Uffizi Gallery in Florence. The painting is a one-sided profile to hide his loss of an eye due from a jousting injury.

“This famous painting is a two-faced profile, just as Federico, the duke, was two-faced, pretending to be allies with the Medicis while secretly conspiring against them,” says Simonetta. “Thanks to the letter, we now know that the other side of his face is Federico’s dark side.”

During a high mass, on Easter Sunday in April 1478, Giuliano de’ Medici was stabbed 19 times and killed. Lorenzo de’ Medici was wounded, but a friend of his stepped in front of the attackers as Lorenzo fled to safety. The attack started a riot in which the city’s residents brutally killed plotters inside the city and hung the Archbishop. Allies of the Pazzi family then declared open war on Florence. Within a few years, Lorenzo?later nicknamed the Magnificent?triumphed and went on to rule over the golden age of Florence. Lorenzo’s survival was fortunate, according to Simonetta, because it was Lorenzo the Magnificent who eventually discovered Michelangelo’s artistic talent.

Simonetta uncovered the letter during research for his doctoral dissertation. In July of 2001, he was granted access to the Ubaldini archive at Urbino, located north of Rome. While on a fishing expedition for his studies, he came across the curious, coded document written in Italian in 1478.

“I knew I was looking at something important here because the letter was dated about two months before the attack on Lorenzo and Giuliano in the cathedral,” he says.

“The letter was actually in the hands of another Italian historian before I discovered it,” Simonetta adds. “He, however, wasn’t fortunate enough to have my ancestor’s manual that I used to decode the letter. More important, he did not want to look in that direction, because he refused to spoil the image of the duke.”

Eventually, the foreign press caught on to Simonetta’s discovery, and articles appeared in leading publications in Italy, Spain, Russia, and Britain. The Renaissance murder mystery is also catching on in the U.S. media with stories in the New York Times, Hartford Courant and Discovery News.

Simonetta moved to the United States in 1995 and earned his Ph.D. in Italian from Yale in 2001. He recently turned his dissertation into a book called Secret Renaissance: The World of the Secretary from Petrarch to Machiavelli.

He plans on writing another book about the secret letter and the Pazzi conspiracy directed to an English-speaking audience.